It was a beautiful summer day.  In the backyard, Wire Dog was admiring a large, spiral Conch seashell that Ellen had washed and left to dry on a back porch stair.  Beneath the rays of the sun, the shell’s smooth surface gleamed so much that Wire Dog could not resist leaning closer and rubbing it with his nose.  Hearing a sound issue from the seashell that sounded like the rushing of water, however, made him jerk his head back in surprise.

Scout the squirrel and Edgar the raven watched with interest from a tree branch.  Finally, their curiosity got the best of them and while Scout scampered down the tree trunk, Edgar used his strong wings to navigate to a spot on the stair where the seashell lay. 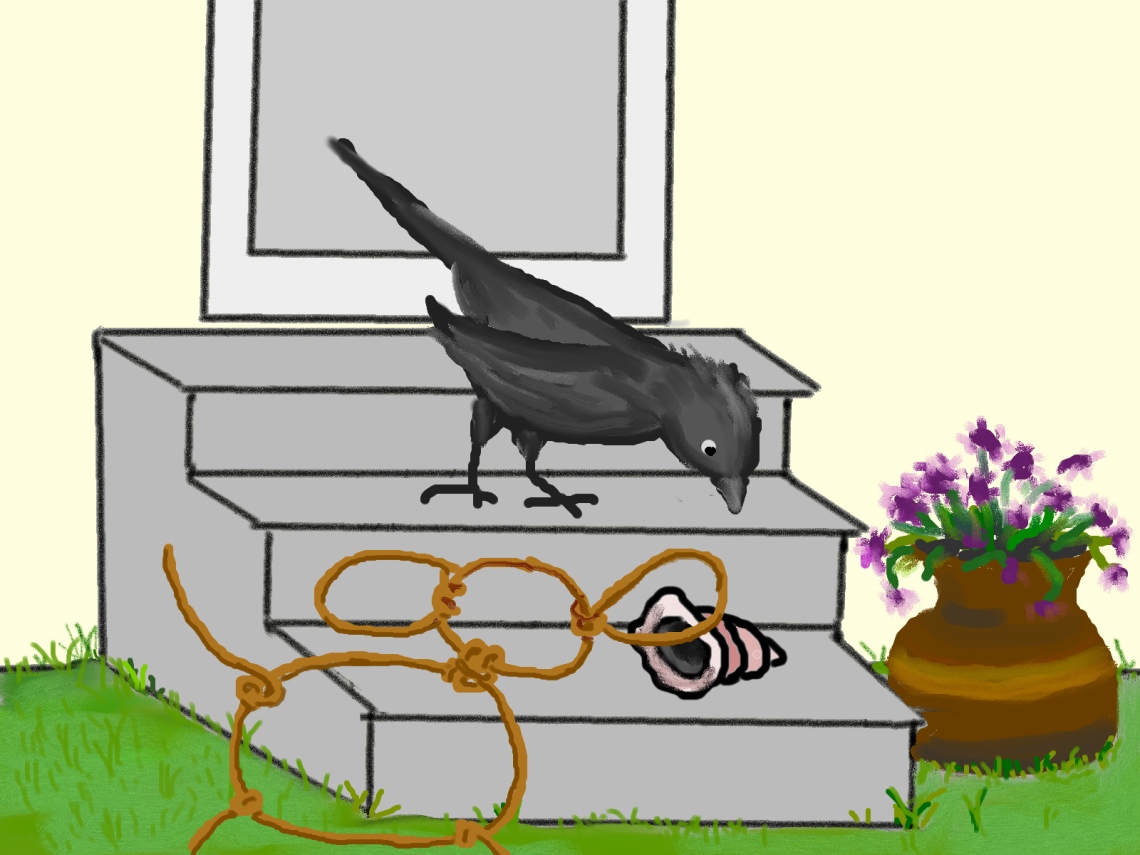 Wire Dog shrugged his shoulders.  “I thought it was just a seashell that Ellen brought back from her family’s beach vacation, but it’s magic.”

“Magic?  How so?” Edgar asked, craning his neck to get a better view of the seashell.

“A sound?”  Scout hopped closer, his tail swishing back and forth.

Edgar was skeptical.  He put his wings on his hips and titled his head.  “Are you sure?”

Wire Dog did not like Edgar doubting him.  Irritated, he took a paw and shoved the seashell closer to the raven.

Edgar pecked suspiciously at it.  Then putting his ear close to the seashell’s opening, he heard the rushing water sound.  Startled, he flew backward off the stair and landed in the

grass a foot away.

“I see what you mean,” he said smoothing his ruffled feathers.

Watching a short distance from them, Scout was beginning to think his friends were playing a joke on him.  However, seeing the serious expressions on their faces, he knew that wasn’t the case.  Having grown cautious, he chewed on his bottom lip debating if he wanted to risk taking a close-up look.  Making his decision, he twitched his whiskers and hopped to a position on the stair.

“Go ahead, check it out,” Wire Dog said, watching him.  His own confidence had grown when his friends joined him.  He knew he had backup, just in case the seashell proved dangerous.

Bending low to the ground, Scout tilted his head and put his left ear near the seashell’s opening.  As he listened, his eyes widened.  The noise was very loud.  It reminded him of the rushing water that flowed from the fire hydrant on the street corner when the city workers flushed it out.  Straightening he looked from Wire Dog to Edgar and back down at the shell.

“Is it possible that the ocean is trapped inside?” he asked, a look of confusion on his face.

Edgar used a wing tip to rub the back of his neck.  “Impossible.  The seashell is too small.  I have seen the ocean.  The water stretches for miles and miles and beyond.  The distance is too far for even a magnificent raven such as me to fly its span.”

“Then how do you explain it, Mr. Know it all,” Wire Dog asked, again feeling a twinge of irritation.

Edgar clucked his beak and began to pace back and forth.  Stopping midstep, he shook his head.  “I cannot.  Did the girl say anything about the seashell?”

“Ellen?  Let me think a minute.”  Wire Dog closed his eyes tightly, concentrating.  A minute later, he opened them.  “She said she would take the seashell to school tomorrow for show and tell.”

“Is that all she said?” Edgar pressed, hoping for more information.

Scout rolled his eyes.  “Maybe she doesn’t know how the seashell makes the noise.”

“I bet she does know.  Ellen is really smart,” Wire Dog said, proudly.

It was at that moment they heard Ellen’s voice coming from inside the house.  The back door slowly opened.  Scout and Edgar hurriedly returned to the tree branch, while Wire Dog lay down on the porch.  Ellen came out the door carrying a bottle of soda and two glasses.  She was with her friend Mary.  They sat on a porch stair.

Ellen put the bottle of soda and glasses next to her.  She reached out and patted Wire Dog on the head.  “Good boy,” she said affectionately.

Turning her attention to the seashell, she picked it up and rubbed its surface.  “Here is the seashell I found on the beach, Mary.  Isn’t it pretty?”

Mary carefully took it from her.  “Yes it is.”

“Hold it up to your ear and listen to the ocean,” Ellen urged.

Mary promptly held it up to her right ear.  Slowly a smile formed on her lips.  “I hear it!  How can that be?”

“Well it really isn’t the ocean, of course, but the noises around you.  They circulate into the shell’s opening and then flow out against your ear.”

Mary listened to the seashell again.  “Wow.  That is cool.  Everyone will love seeing it at show and tell.”

“You’ll really like this.  My father showed me that a glass does the same thing with noises.  Here, try it.”  Ellen exchanged the seashell for a glass.

Ellen took the glass back.  She poured some soda into it, before returning it to her friend.

Mary took a sip, while Ellen filled another glass.

The girls quickly drank their soda.

Ellen put down her glass and picked up the seashell.  Idly she used a fingertip to trace around the curved shell.  “I really hated to leave the beach.  It was so fun there.  We swam in the ocean, built sandcastles, and collected seashells.”

“Well summer vacation is over and it’s back to school tomorrow.”  Mary sighed and got up.

Ellen picked up the seashell and stood.  “That’s right.  Let’s go upstairs to my bedroom.  You can help me pick out something nice to wear on the first day.”

“Okay.”  Mary gathered the bottle of soda and glasses and followed Ellen inside the house.

After the door shut behind them, Wire Dog walked to the tree and looked up.  “Did you hear?”

Scout nodded.  “Yes, but it doesn’t make any sense.  The noise the seashell makes definitely sounds like water not voices or car sounds or . . .”

Edgar squawked and moved a wing in a circular motion.  “It’s a combination of sounds when the noise comes out of the seashell.”

Scout was still not convinced.

Wire Dog smiled at his friends.  “Let’s just say the seashell is magic.”

Scout and Edgar exchanged a look and then turned to Wire Dog.  “Agreed,” they said together.

Now the friends focused their attention to playing.  While Wire Dog kicked a baseball, Scout chased it across the backyard, and Edgar flew circles overhead.  It really was a beautiful summer day.