After a stormy night of lightning, thunder, and gusty wind, the following morning the sun was shining brightly in the cloudless blue sky when Wire Dog stepped out of his dog house.  He immediately spotted a large rain puddle in the backyard near the fence and walked over to examine it.  Sticking a paw into the murky, muddy water, a thought began to form in his head.

Scout the squirrel watched him curiously from his rain-soggy nest high up in the old oak tree.  Finally he hopped out onto a branch.  There he chattered in disgust, shaking water from his back, hopeful that the rain had finally ended and things would soon be drying out, including his fur.

Hearing his friend, Wire Dog looked up at him.  “That storm last night was scary, glad to see you are all right, Scout.”

“I wish I had been out of the rain like you,” Scout said, looking with envy at the watertight wood dog house, as he scampered down the tree trunk.

“Next time it storms, you are welcome to take shelter with me,” Wire Dog said, more than willing to share his dog house.

But before Scout could thank him, there was loud squawking overhead.  Edgar the raven swooped down to land near the puddle.

“What’s up?” he asked, looking from Wire Dog to Scout.

“Drying out after the rain, my nest is all wet,” Scout complained, whiskers twitching.

Wire Dog decided to change the subject.  “I think we can have fun with this rain puddle.”

“How so?” Scout asked, coming closer to sniff the water.

“Over by the trash can, there’s a big box that Ellen’s parents are throwing away.  Let’s make a boat and be pirates!”

“Pirates?  What are pirates?” Edgar asked, eyes looking toward the cardboard box.

“They are people that have a large ship and sail the seas looking for buried treasure.”

Scout nodded.  “I was on the drain pipe by Ellen’s bedroom window yesterday afternoon when she was reading a book to you about pirates, Wire.”

“I heard the name Captain Long John Silver.  He had one leg and a talking parrot.  Wire, you can be the captain and Edgar can be . . .”

Edgar frowned, while the black feathers on his head raised and ruffled huffily.  “I am not a parrot!  I will be a handsome raven, thank you!”

“There’s certainly no reason why our ship cannot have a raven aboard instead of a parrot,” Wire Dog agreed quickly to avoid a conflict.  He headed to the box.

“And I will be Jim Hawkins the hero cabin boy,” added Scout, following him.

So while Wire Dog and Scout pushed the box across the grass, Edgar stood by the puddle moving his wings back and forth as he called out directions.  In no time at all, the box was launched onto the water.

Wire Dog immediately jumped into the box.  It shifted slightly beneath his weight but seemed to be a sea-worthy vessel.  Scout leaped onto the edge of the box and Edgar flew there to land next to him.  Of course the puddle wasn’t much larger than the makeshift pirate ship, but it certainly gave the illusion of sailing as it began to rock back and forth from the weight of the three passengers.

“We will sail the seven seas until we spot an island where buried treasure can be found,” Wire Dog said, his eyes gleaming with imagination.

Edgar wasn’t sure about playing the game, but it was a good enough way to pass some time while his nest dried out in the sun.

A few minutes passed and Edgar could see by their closed eyes and slow, even breathing that they were sleeping soundly.  This would not do.  He was promised shiny things and he loved shiny things.  He flapped his wings furiously.

“Wake up!  Wake up!  Let’s find the treasure!” he squawked loudly.

Wire Dog and Scout’s eyes flew open.  Now fully awake, they jumped to their feet.  Looking down they saw the bottom of the box was rapidly becoming water saturated and a large hole was forming in the cardboard!

“Abandon ship!” Wire Dog shouted as he jumped over the side of the box to land on the grass.

His friends also fled.  Standing on the edge of the puddle, they watched their ship sink and become a soggy mess in the three-inch deep water.

“What now?” Scout asked, looking to Wire Dog for the answer.

“We dig for treasure!”

Edgar looked around the yard.  “Where?”

“At the base of the oak tree.  It is old and would be a perfect place to find buried treasure,” Wire Dog said with confidence.

Scout and Edgar looked skeptical but followed Wire Dog to the tree.  He promptly began to dig with his front paws and soon wet dirt was flung over his shoulders and onto his friends.  Scout wiped mud from his face and decided digging was more fun than getting muddy, so he took a position next to Wire Dog and began to fling his own dirt.

Edgar flew to a low limb out of the line of fire and tilted his head to one side, watching the digging progress with mounting interest.

Using a clawed foot to move the items around, he made a quick list, “Four bottle caps, two pieces of glass, and a smooth stone.”

Scout kicked the stone.  “A stash of acorns would have been better.”

Scout pursed his lips.  “Exactly, though I would have no use for it either.”

But Edgar was quite happy as he claimed the bottle caps and glass for himself.  He swiftly flew the shiny things to his drying nest.  Finally getting into the spirit of the game, when he returned to the ground he had an idea.

“I know what will cheer you up, Scout,” Edgar said, before he took flight again.

Wire Dog and Scout watched the raven fly over several neighborhood housetops and then disappear from sight.

Scout frowned slightly, using a paw to shade his eyes from the bright sunshine.  “Where do you suppose he is going, Wire?”

However, they soon heard loud flapping of wings and saw Edgar circle the backyard and then swoop from the sky to land next to them.  There was half a corn cob in his large beak.  Promptly the corn cob was dropped next to the smooth stone.

Scout licked his lips, while his eyes centered on the gold corn kernels that covered the cob.  “Looks tasty.” 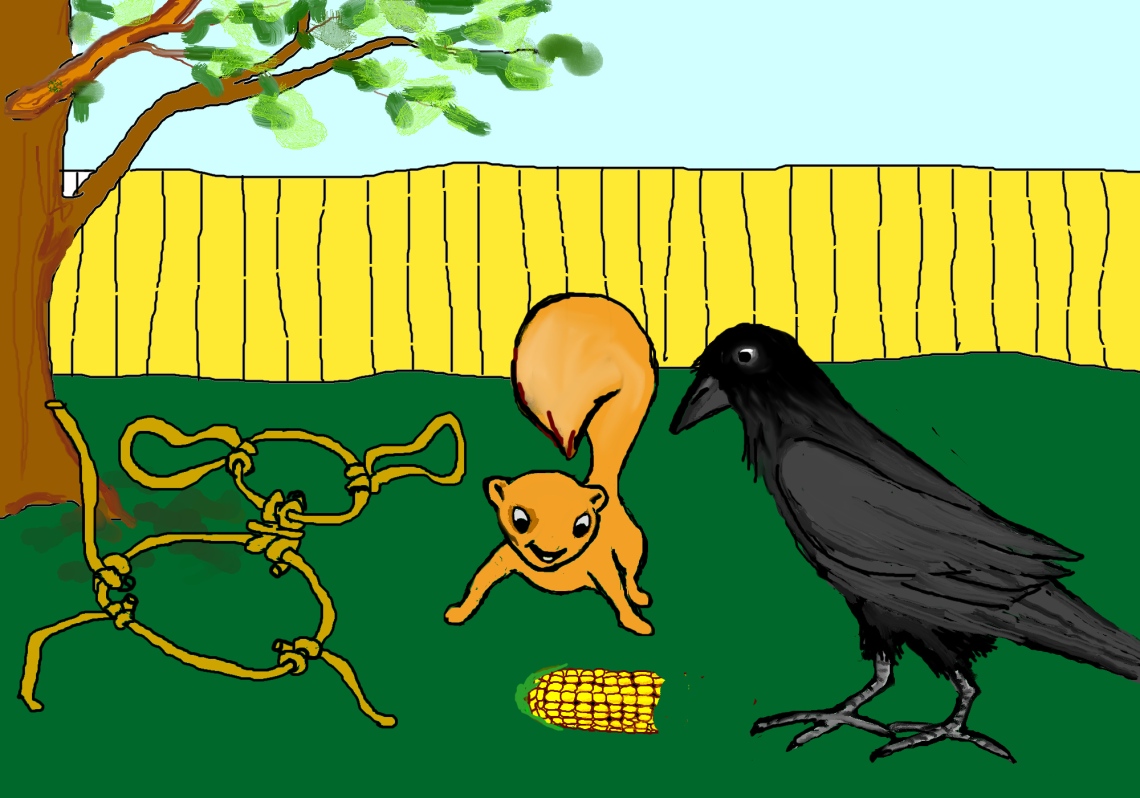 So while Scout quickly devoured his treasure, Edgar flew to his nest to reexamine his.

But the greatest treasure of all was the good feeling that Wire Dog had seeing his friends so happy.