Written and Illustrated by Ella K Walters
Wire Dog was having a dream, a wonderful, delicious dream. He was swimming in a sea of hot dogs. He could feel them slipping down his back and their thick, rich scent filled his nostrils.

Forgetting everything but finding the source of the scent, Wire Dog raced out of the bedroom, skidded through the hallway and landed in a pile at Ellen’s feet, where she was packing the hot dogs into a basket.

“Good morning,” Ellen giggled as Wire Dog untangled himself. “I’m glad to see that you’re excited about the Doggy Day in the Park.”

The Doggy Day in the Park! He had forgotten all about it! There were going to be games, races, prizes, and to top it all off, a pot luck lunch!

Wire Dog was so excited to get there, that Ellen had to run to keep up to him.

Finally they got to the park. Wire Dog bounded along happily, checking out the games. Then he saw it. It was like a huge rubber dinosaur, almost as big as he was. Wire Dog knew he would love to play and jump on it.  Then he saw some other dogs lining up behind a line next to the toy.

A race! Wire Dog was good at races. He quickly lined up next to some other dogs while Ellen went to the sidelines.

Soon an attendant came over and showed the dogs where they were to run.

“On your marks. Get set. Go!” And the dogs were off. Wire Dog was fast, but not fast enough to beat one other dog. 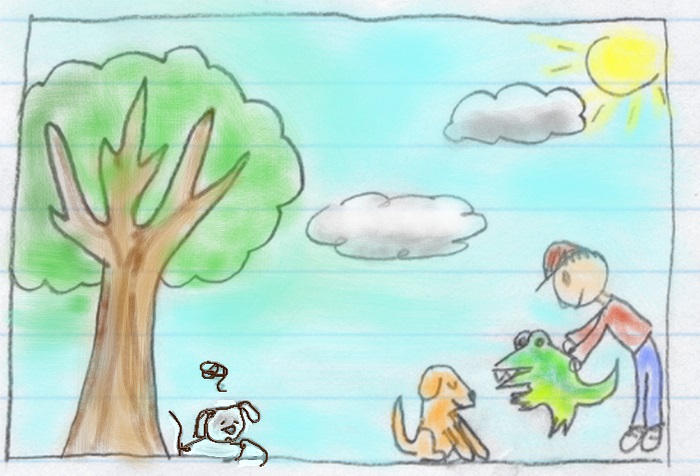 “And we have our winner!” yelled the attendant, awarding the dog the dinosaur prize.

Wire Dog sadly sulked over to a tree and lay down in the shade, and grumpily watched the dog carry off its prize.

Sometime later, Ellen came wandering over. “There you are!” she exclaimed. The she saw the look on his face. “0h Wire Dog,” she said, scooping him up. “You haven’t been sulking here all this time, have you? You’re missing out on a lot of other fun stuff.”

Wire Dog thought about that. Ellen was right. It hadn’t been very fun sitting there all by himself. He decided to give the rest of the Doggy Day a try, and he had a blast. He and Ellen didn’t see any more big toys, but they did win a lot of smaller ones, like rubber balls, and doggie treats. And the best part of all was the potluck picnic where he ate a total of 15 hot dogs, 4 bags of chips, and 22 slices of watermelon.

Later, as Ellen packing up he decided that Ellen was right: it had been a lot of fun, and he was glad that he gave it a try. 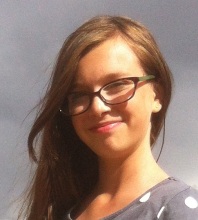 Ella Walters lives in Stirling Alberta Canada with her Mom, Dad, 3 brothers, 2 sisters, 2 cats and a gold fish. She wrote her first Wire Dog story last year when she was in Grade 6 living in Edmonton. Now she is in grade 7 at the K-12 rural school in Stirling and has submitted another fun story for the Wire Dog Collection.