Wire Dog was almost as excited as his Ellen! They were going to visit Abigail the Bookworm at her house. Although Abigail had visited Ellen and Wire several times, neither of them had ever been to her house. And what was even more exciting was that, according to Ellen, Abigail lived in a tree!

A treehouse! Wire kept trying to picture a treehouse during the drive to Abigail’s. Oh, sure, he hung his head out the car window to sniff all the exciting smells along the way. Certainly, he enjoyed the feel of the sharp, brisk wind in his face and whipping across his curly wire ears. 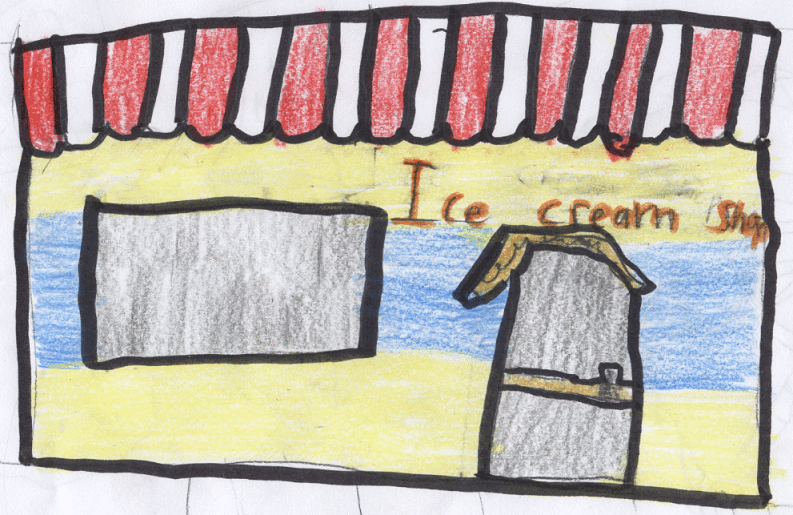 Definitely, he loved the stop at the ice cream shop where Ellen got her favorite: two scoops of French vanilla with sprinkles in a waffle cone. Positively, Wire loved the drips of delicious ice cream he got to lick from her hands, and the bits of crispy-soggy cone she sneaked him when her parents weren’t looking.

But even during all this excitement, Wire Dog kept thinking of Abigail’s treehouse. Imagine living in a tree! The only things Wire had ever seen living in trees were bright birds and sneaky squirrels and beautiful bugs and butterflies.

When they pulled into a driveway at last and only an ordinary house stood before them, Wire Dog could only feel disappointed. But then the front door slammed open and Abigail flew out towards them, scooping up Ellen in a huge hug, then kneeling down to give Wire a hug too.

“We’ll pick you up later, honey,” said her parents as they drove away.

“Let’s go inside,” Abigail said, “and get some snacks first.”

Wire Dog loved snacks, as all right-thinking dogs and people do. He followed Abigail and Ellen into the perfectly ordinary, not-at-all-tree-like house. In the kitchen, Abigail’s mother was packing yummy smelling cookies into a basket and sliding cold juice boxes and water bottles in after them.

“Hello, Ellen!” said Abigail’s mother. “And this must be the famous Wire Dog I’ve heard so much about!”

She reached down and patted Wire while he tried not to look too proud. He didn’t know he was famous!

Abigail’s mother handed her the basket. “You have fun and don’t spend all day telling stories!”

“Mother!” said Abigail. “Of course we’ll spend all day telling stories! There are so many!” 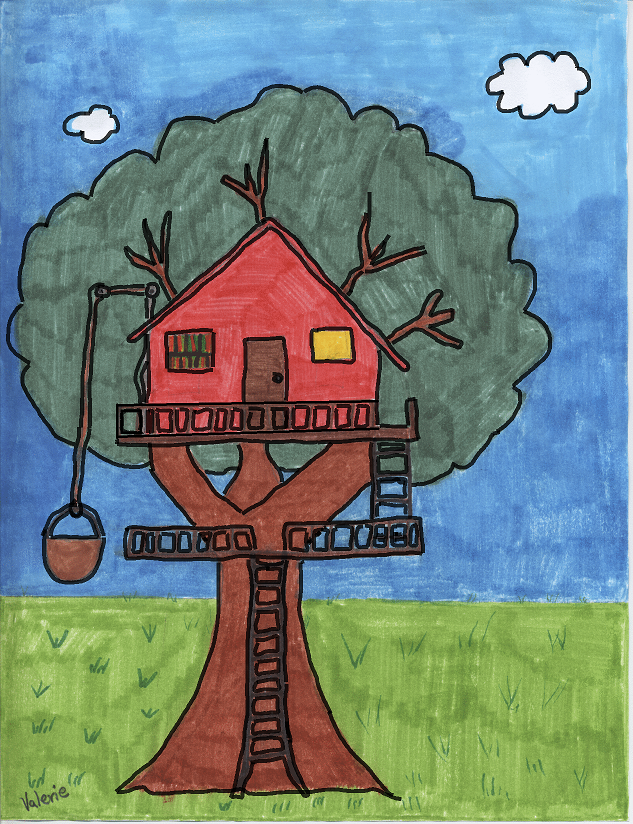 Abigail led Ellen and Wire out the kitchen door into the back yard. And there, high up in the branches of a mighty oak, Wire Dog saw the treehouse. It was beautiful! A firm, strong, little wooden house painted red sat across three huge limbs, with a ladder leading up to a small platform below it, then another, shorter ladder leading to a railed porch on the front of the treehouse.

“But, Abigail,” said Ellen, and Wire heard the dismay in her voice. “How can Wire get up those ladders?”

Wire was worried himself. He could go up stairs, he could go up ramps, but a ladder—well, that was a different matter.

“Not to worry!” Abigail said. “Wire, see that basket right there?”

Wire saw the basket; it was sturdy and strong-looking, with a thick rope attached to the handle. The rope reached up towards the treehouse, going around several pulleys, with the other end tied to a big iron hook.

“Wire, you get in the basket, and when we get up to the treehouse, we’ll pull you up!”

And so they did. Wire was a little nervous at first, but he found he enjoyed the trip. It wasn’t as fast and exciting and windy as hanging his head out the car window, but it was still lots of fun and only a little bit scary.

When he got out of the basket, he followed Ellen and Abigail into the small house in the tree. The house was bigger than Ellen’s bedroom, with a door and two windows and a peaked roof. And what wasn’t door or windows or roof—was bookshelves. Each and every wall was covered with shelves, all of which were stacked with books.

Ellen sat down in a small chair in the middle of the room; that chair, two others and a round wooden table where Abigail sat the snacks basket were the only things in the room…well, except for the books!

“Whew!” said Ellen. “I don’t think I’ve ever seen so many books except maybe in the library.”

Abigail looked around her room and Wire Dog could see the pleasure on her face as she eyed her books. She walked over to the left wall and picked a small paperback book out. Wire looked at the cover when she set it on the table. It had a picture of dinosaurs on the front. Wire knew all about dinosaurs; they were very interesting creatures, to be sure, but he was glad there weren’t any great big scary reptiles around his neighborhood! 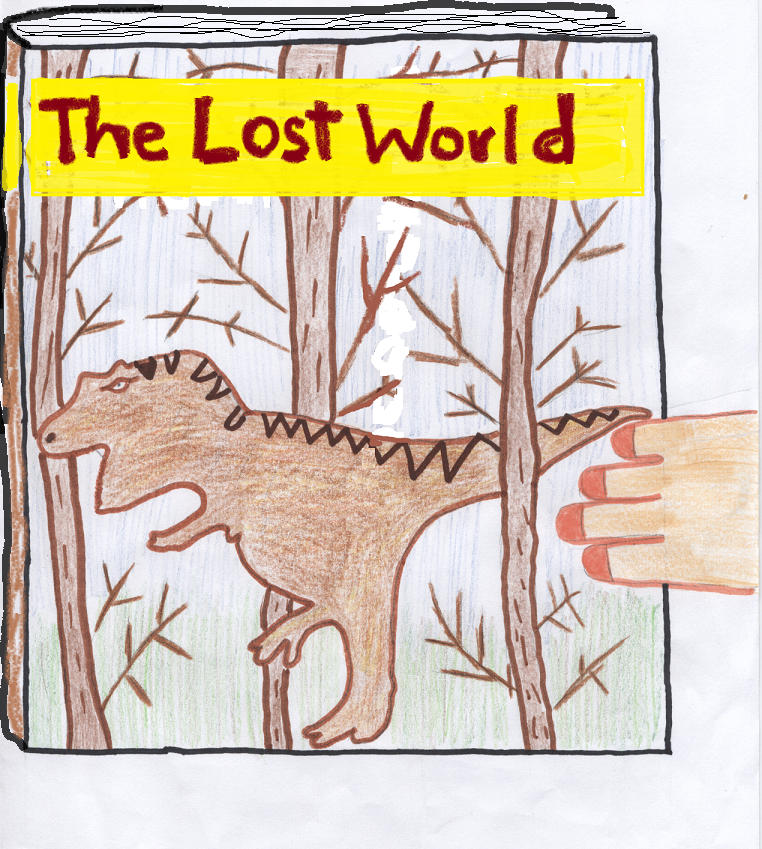 “This is a great book!” began Abigail as she opened the bright cover. “It was written over a hundred years ago by Sir Arthur Conan Doyle.”

“But I thought he wrote about Sherlock Holmes,” said Ellen as she unpacked the snacks from the basket, “not dinosaurs.”

“He did,” said Abigail, “but he also wrote The Lost World. It’s an exciting story about four men—two scientists, a great hunter, and a young newspaper reporter—who journey to a plateau in the rain forests of South America.”

This was lucky, for Wire wanted to know as well.

“A plateau is kind of like a raised section of land, almost like a table or a high mountain with a flat top. This plateau in South America is as big as a county and sits high above the jungle, with steep walls that no one can climb up or down. And on the top of this plateau, cut off from the rest of the world, is the Lost World. Up there, dinosaurs still live, even though they died off a long time ago in the rest of the world.” Abigail opened the book to the first page. “The reporter, Ned Malone, first meets Professor George Edward Challenger when Ned is looking for an adventure he can go on to impress his girlfriend…”

Wire held his breath—well, except when he was eating cookies or drinking out of the water bowl Abigail’s mother had kindly provided him—as Abigail told all about the adventures of Professors Challenger and Summerlee, Lord John Roxton and Ned Malone. They traveled through dense forests and jungles, were betrayed, got trapped on the plateau with no way down, were almost eaten by huge dinosaurs, and met creepy ape-men.

One funny part, when Wire couldn’t help but laugh, was when the others noticed that the ape-men looked almost exactly like Professor Challenger, except the apes were covered in dark fur and the professor was covered in dense red hair.

Such adventures these four men had! Wire’s ears and tail stood on end when poor Ned had to run from a carnivorous dinosaur—carnivorous meant it ate meat instead of plants, so it wanted to eat Ned—and fell into a pit. Wire thumped his tail in excitement when Lord John walked on a tree across a huge crevasse—a crevasse is a huge, deep crack or hole. And he worried about all four of the men during their amazing adventures. Would they escape? Would they ever see their homes again?

When Abigail reached the end of the story, Ellen sat back in her chair. “Wow, that’s a great story! I’d love to go to a lost world and see dinosaurs, wouldn’t you, Wire?”

Wire looked around at the cozy treehouse. He sniffed the cookie crumbs he’d somehow missed and licked them up. And then he thought of running through thick trees while being chased by huge dinosaurs with scales and teeth and claws.

Wire decided he was perfectly happy right where he was. But that didn’t mean he wasn’t always ready to hear another one of Abigail’s stories, of course! 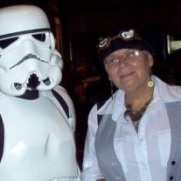 K.G. McAbee has had several books and nearly a hundred short stories published, some of them quite readable. She writes steampunk, fantasy, science fiction, horror, pulp, westerns and, most recently, mysteries; her ‘Dyed to Death’ won the prestigious Black Orchid Novella award and appeared in Alfred Hitchcock’s Mystery Magazine. She’s a member of Horror Writers Association, Sisters in Crime and International Thriller Writers and is an Artist in Residence in Literature with the South Carolina Arts Commission.

Travis, Michael, Valerie and Pauline Hofer are students at the Enchant Colony School in Alberta Canada. They like to read write and draw Wire Dog Stories and we thank them for the illustrations in Story 42 Wire Dog and the Lost World, written by K G McAbee.