Wire Dog woke up in a bad mood. It was very unlike Wire, who was normally jolly and fun to be around. But Ellen spotted it right away. She went outside especially to play with her little friend, but instead of coming out of his little doghouse, Wire merely raised his funny little wire ears and didn’t even wag his tail.

“What’s wrong with you this morning?” Ellen asked.

Wire just hung his head on his paws and looked sad.

This concerned Ellen, but she didn’t want Wire to see how worried she was. If Wire didn’t want to play, then Ellen would pretend she had other things to do.

Walking around the house, she saw that the birdbath was almost dry and added some water. Hearing Red Bird and Blue Jay behind her, she turned to see them sitting on a tree limb with Squirrel. Squirrel was munching on an acorn, as usual, while Red and Jay fussed at him.

Ellen couldn’t help but smile at their antics, and was about to scold them in fun, when something else caught her eye.

Wire had followed her around the house, but he still looked angry, so she didn’t say anything to the little rascal. However, his mood didn’t stop Red and Jay from turning their attention from Squirrel to him. They also noticed something was the matter with their friend.

The birds began singing their favorite bird songs, which had always perked Wire up in the past, and usually got the little fella rolling around on the grass. Squirrel even tried to get Wire to sniff out a lost acorn.

Nothing appeared to help, though. Wire just moped about, and if he said anything it was nothing more than a grumble.

Ellen found Wire’s favorite ball right where he had left it yesterday. She picked it up, and made to throw it – which was Wire’s favorite game – but Wire just hung his head and grumbled some more.

By now Ellen was wondering just what she could do to bring Wire out of his ugly mood. She didn’t want Mom and Dad to see Wire like this. They might make him take some medicine, and she knew how he hated those big pills the veterinarian always gave him.

She tossed the ball a few feet from Wire, but her little friend didn’t pay any attention to it.

Ellen knew that this was serious, and she had to think of something to bring Wire out of this ugly mood.

As she led Wire around to the front of the house again, Red and Jay went back to fussing with Squirrel, figuring their friend would come back later and be in a better mood. Besides, their attention span wasn’t very long, either.

But Ellen wasn’t so sure that Wire would snap out of it without help. She felt that something had to be done, and she was the only one who could make Wire see the situation he was in. Then she had an idea. Just a few days ago her class had taken a field trip to a strange place in town. She even remembered the plaque on the wall by the door, and she smiled real big.

This would work. Ellen was sure of it.

When Ellen went in the house, Wire followed at her feet, grumbling all the time. It seemed nothing was going to cheer him up.

Ellen found Mom in the kitchen and whispered something in her ear. It was too low for Wire to hear, but he wasn’t interested anyway.

Mom smiled, then patted Wire on the head and gave him one of his favorite dog biscuits.

Grumbling some more, Wire carried the biscuit to a corner and sat down to chew on the tasty treat.

Mom and Ellen left him there and went into the living room where Mom called someone on the telephone. Wire saw them giggling after a few minutes, then Mom hung up the phone, and Ellen came to kitchen door.

“Wire, I have a surprise for you,” she said. ”We’re going for a little walk.”

Now this seemed to perk Wire up a bit, as Ellen saw his tail twitch just a little. Getting the leash, she put it on him, and said, “Time to go, Grumpy!”

Wire had no idea where they were going, but at least he would get to see all his neighborhood friends as they passed, and it was only a few blocks to down town. And that appeared to be where Ellen was taking him.

Wire loved going to town with Ellen. Sometimes she even bought an ice cream cone, or a candy bar, and gave him a bite. And she knew so many other little girls and boys her age, so they were always encountering someone, and that meant more pats on the head.

Wire’s steps became a little more bouncy as they passed the neighbors’ houses. However, Ellen could still hear some low grumbles coming from her little friend.

To his disappointment, Ellen passed right by the ice cream parlor, and even the candy store was left behind. Where could she be going? Wire wondered.

Finally, Ellen stopped in front of a door, but there were no pictures on the walls, or smells coming from inside. Ellen did appear interested in something framed on the wall next to the door, but it wasn’t a picture.

Ellen pushed on a small button on the wall next to the door, and shortly the door opened, and a tall, thin man looked out at them.

“This must be Wire?” the bald headed man grinned, as he patted Wire on the head. Wire had never seen the man before, so he only grumbled and wagged his tail once.

“Come in, come in,” the man said, as he held the door wide for them. It was dark inside, though, and Wire still couldn’t smell anything. The door shut behind them, and Wire jumped because of the sudden noise. What’s going on now? Wire shuddered.

Wire heard a click, and lights turned the room into a brilliant glare for a minute, then the little wire dog was astounded at what he saw. There were hundreds of little dogs just like him – everywhere! And they were all grumbling At first he wanted to run back to the door, but then he become curious at all the sad looking dogs. He sniffed and sniffed at each one, but still couldn’t smell them.

Finally, Ellen said, “I think that’s enough. Would you mind reading the plaque for us?”

“Of course,” the man said, as he led them to the door again.

Outside once more, Ellen and Wire stood beside the wall as the man began to tell them a story: “What I am about to read was written by an anonymous author. That means the writer didn’t include his name on the work, or no one really knows who wrote it. So it is merely inscribed as by Anonymous. The title is HOUSE OF 1000 MIRRORS.

“I quote: ‘Long ago, in a small, far away village, there was a place known as the House of 1000 Mirrors. A small, happy little dog learned of this place and decided to visit. When he arrived, he bounced happily up the stairs to the doorway of the house. He looked through the doorway with his ears lifted high and his tail wagging as fast as it could. To his great surprise, he found himself staring at 1000 other happy little dogs with their tails wagging just as fast as his. He smiled a great smile, and was answered with 1000 great smiles just as warm and friendly. As he left the house, he thought to himself, “This is a wonderful place. I will come back and visit it often.”

In this same village, another little dog, who was not quite as happy as the first one, decided to visit the house. He slowly climbed the stairs and hung his head low as he looked into the door. When he saw the 1000 unfriendly dogs staring back at him, he growled at them and was horrified to see 1000 little dogs growling back at him. As he left, he thought to himself, “That is a horrible place, and I will never go back there again.”

All the faces in the world are mirrors. What kind of reflections do you see in the faces of the people you meet?’ End quote.”

“Thank you, Mr. Jacob,” Ellen told the man, and then she looked down at her little friend. “What face did you see in the mirrors, Wire?”

For a minute Wire looked up at Ellen with sad eyes, then his ears lifted, his tail started wagging, and his eyes began to sparkle.

The man grinned as he opened the door once more and Ellen took Wire inside, this time to see the happy little dog. 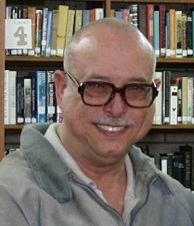 Tom Johnson’s dad was a cowboy and cook, and this gave his family an itinerant lifestyle. He changed schools often, as his dad’s jobs were moved. His dad wanted him to follow in his footsteps, but a cowboy’s life didn’t appeal to him. Instead, during his high school years, Tom dreamed about becoming an entomologist. He loved biology and math, but was weak in other subjects. He read every book he could find on insects, reptiles, and arachnids, as well as paleontology. However, his life changed when he joined the Army and spent a 20-year career in law enforcement. Afterwards, he and his wife started the publishing imprint, FADING SHADOWS, and published a hobby magazine for 22 years, and several genre titles for nine years. He was a voracious reader from an early age, and has never stopped reading for pleasure. In his own books readers will often find something about his love, zoology, whether insects, reptiles, or saber-tooth cats. If readers would like to learn more about the subject of paleontology, his YA novel, THREE GO BACK, features three teenage girls who accidentally go back in time through the prehistoric epochs of our past, and come away with knowledge and adventure they’ll never forget.
Tom’s Blog http://pulplair.blogspot.com
Tom’s Face Book Page https://www.facebook.com/tomginger.johnson
Tom’s Books http://jur1.brinkster.net/index.html
Tom’s Amazon Page http://www.amazon.com/-/e/B008MM81CM
NTD http://bloodredshadow.com/night-to-dawn-magazine-and-books/tom-johnsons-sf-and-adventure/
ALTUS PRESS http://www.altuspress.com
FIRST REALM

Originally from rural Saskatchewan, Alice L. Jones, a graduate from the University of Lethbridge with a Bachelor’s Fine Arts degree in New Media, began to freelance as an illustrator. Most often her projects use Photoshop, Wacom graphic tablets, paper, pencils, and pens for illustration, and card making. Those who have met her would describe her as a very creative, detail oriented, and positive person. Often she can be found sketching, writing, or reading. Feel free to visit her website at www.aliceljones.com.