The girl’s room was off limits right now, and Wire Dog didn’t understand why. Ellen was carrying heavy sacks from mom and dad’s car, and taking them straight to her playroom. This intrigued Wire enough to investigate, but the door always slammed into his nose as he reached the portal.

Coming from the room, Ellen wagged her finger at Wire, and said, “Don’t you dare go in there!”

Wire Dog followed Ellen back to the car in time to see her pick up another sack. To his disappointment all the sacks were filled, and he could not see what was inside them.

Carrying the last sack into the room, Ellen closed the door leaving Wire on the outside in a huff. He paced the floor for several minutes until a commotion on the screen door caught his attention, and he raced for the front of the house before the Monarch flew away; for that’s what it was, a beautiful Monarch butterfly. Wire stared in awe at the creature for a fleeting minute, then the insect fluttered away, losing interest in Wire.

Wire Dog’s eyes were then diverted to the porch. A big, black beetle was scuttling across the concrete near the steps. Afraid it would disappear in the grass before he got outside, Wire pushed the screen with his nose and almost slid off the porch in his rush. Just in time, Wire watched the beetle as it reached the bottom step. Before it disappeared into the thick grass next to the porch, he was amazed to see horns on its head like a rhinoceros. Then it was out of sight.

The screen door was now shut, but Wire learned a long time ago how to use his nose to advantage in opening it to enter the house. Wiggling his little nose in the small crack between the door and frame, he pulled the portal open and slid inside before it closed on his tail. That happened once, and Ellen heard him yelp and came running to his rescue. He was so embarrassed.

Later that afternoon, Wire heard Ellen come out of the room. Entering the living room, she plopped down on the couch complaining to mom and dad how tired she was.

Dad smiled, and then continued reading the newspaper.

Mom asked, “Are you finished with the project, dear?”

Wire Dog sneaked out before they saw him, and headed for the playroom. He was surprised to see the door ajar. Looking back toward the living room, he saw that Ellen was occupied with a thick book. Since she left the door open, he saw no harm in checking things out. After all, she did tell Mom she was finished. That must mean it was okay to look inside.

Slipping through the doorway, Wire Dog’s world turned upside down.

He came face to face with a three-horned monstrosity he had never seen before. The room was filled with beasts along the walls. Running towards the far wall, he almost collided with another monster that stood on large hind legs, with small front legs, each ending in menacing claws. Glancing quickly behind this creature he was amazed to see many more monsters of different shapes. They appeared to be watching him with evil eyes.

This was too much, and poor Wire Dog raced to the next wall. But he had not escaped the menacing monsters, for the first thing he saw was a huge dog-like beast with long tusk and menacing teeth.

A few feet on he encountered something that looked like a lizard, but nothing like the ones in the yard. This one had a sail on its back, and looked ready to take a bite out of Wire’s nose!

There was another monster with tusks next to the lizard with the sail. But it was more horrible than the dog-like beast he saw behind him. Wire was wishing he had listened to Ellen, and never entered the room. He must find the door again, and get out. He never wanted to come back here again.

Turning down the final wall, he knew the door was close, but the things that greeted him were worse than what he had just left. A giant spider was next to a huge centipede and millipede. This was too much. He spotted the door, closed his eyes and rushed for the opening with a loud yelp.

Flying through the opening he collided with Ellen. She had heard his yelp and was coming to investigate when she saw the open door to the playroom.

“Monsters!” Wire Dog yelped once he was safely clutched in Ellen’s arms.

“Wire, you silly dog, what are you talking about?”

“In there, Ellen,” he motioned towards the chamber with all the strange creatures surrounding the walls. Then he told her about all the things he had seen in there, and the terrible experience it was.

Ellen could not help but giggle at Wire Dog’s fright. She held him a little tighter, as she entered the room with Wire in her arms.

“See this book I’ve been reading, Wire?” she asked. “It’s part of my school project, just as this room, and everything in it, is. Our class was assigned different periods in our past history to study and present to the rest of the class.

“My lesson was the periods covering our Cretaceous, Jurassic, Triassic, Permian, and Carboniferous epochs. Now, from the descriptions of the monsters you told me about they must have been these,” and she pointed to each creature as they came to it.

“We are at the east wall, and the three-horned animal that frightened you is a Triceratops. This is the Cretaceous Period that lasted from 65 million to 145 million years ago. And all those creatures behind it also lived in that Period.

“And of course, the next one you described is our favorite, the Tyrannosaur, the King of the dinosaurs. This one happens to be from the Jurassic Period, which ran from 145 million to 199.6 million years ago. 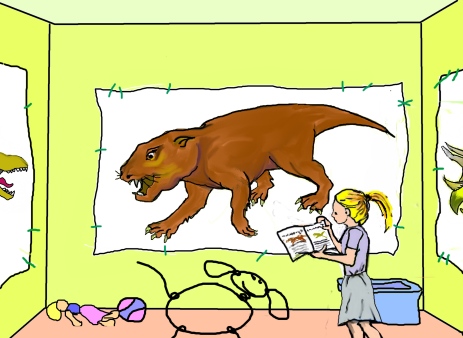 “Here is the dog-like creature with long teeth – called a saber-tooth by some. My book calls the animal a Cynognathus. There were many reptiles and amphibians during the Triassic Period, and also saw the beginning of the dinosaur species. This Period was from 196.6 million to 250 million years ago.

“Our next wall features the Permian Period, which ran from about 251 million to 300 million years ago. This was another Period of reptiles and amphibians, with some animal morphs. The two creatures you saw were the finback Dimetrodon, a lizard with a sail on it’s back. And the ugly saber-toothed monster was a Gorgon.

“Giant spiders, centipedes, and millipedes lived during the Carboniferous Period. Centipedes and millipedes reached a length of seven to ten feet, and spiders were as big as Dad’s head. Some insects, like the dragonflies, were huge, as well.

“Now, do you understand what my room is about? I’ve turned it into a time machine to show my class what animal life was like millions of years ago. What do you think of it, Wire?”

Wire Dog was thinking exactly along those lines, but he wasn’t sure he should tell Ellen. Instead, he kept his thoughts to himself: I think I will have nightmares. That’s what I think.

The experience did give Wire a lot of pleasure, though. And despite what he first believed, he thought often of the time travel to the past, and imagined living among such beasts that occupied Ellen’s room.

Tom Johnson’s dad was a cowboy and cook, and this gave his family an itinerant lifestyle. He changed schools often, as his dad’s jobs were moved. His dad wanted him to follow in his footsteps, but a cowboy’s life didn’t appeal to him. Instead, during his high school years, Tom dreamed about becoming an entomologist. He loved biology and math, but was weak in other subjects. He read every book he could find on insects, reptiles, and arachnids, as well as paleontology. However, his life changed when he joined the Army and spent a 20-year career in law enforcement. Afterwards, he and his wife started the publishing imprint, FADING SHADOWS, and published a hobby magazine for 22 years, and several genre titles for nine years. He was a voracious reader from an early age, and has never stopped reading for pleasure. In his own books readers will often find something about his love, zoology, whether insects, reptiles, or saber-tooth cats. If readers would like to learn more about the subject of paleontology, his YA novel, THREE GO BACK, features three teenage girls who accidentally go back in time through the prehistoric epochs of our past, and come away with knowledge and adventure they’ll never forget.