Sometimes we should think twice before we do something foolish.

One day Ellen and Wire Dog went out for a bike ride. Near their home was a park, with a bike path that wound its way around a small lake. As Ellen peddled her bike, Wire Dog ran beside her, sometimes stopping to sniff at a rock or plant, then running to catch up or racing out in front. Ellen was impressed with her dog’s energy and the ease with which he could run and never seem to get tired.

They passed mothers with little children, couples strolling hand in hand, and people walking their dog on a leash. Suddenly Ellen had what she thought was a great idea. If she put a leash on Wire Dog and attached it to her bike, he could pull her all around the park.

Ellen didn’t have a leash long enough for what she had in mind, but she knew there was a rope hanging in the shed at home that would be just about right. “Let’s go,” she called out to her dog and off they raced for home, to get the rope.

In the shed, Ellen easily found the rope and in a jiffy she was on her bike with rope in hand, headed back to the pathway around the lake.

When Ellen came to a place where the path went straight for some distance, she stopped, got off her bike, and tied one end of the rope to the front of her bike, just below the handlebars. Then she laid out the rope on the path in front of her bike. Next she called Wire Dog to her and tied the other end around his neck. She made sure it was loose enough that it would not choke her dog. She also made sure the knot was the kind that would not slip when tension was put on the rope when Wire Dog would start to pull.

When it was all set, Ellen walked back to her bike, picked it up and was about to get on when she realized that Wire Dog had followed her.

“No, no, no, you silly dog. You are supposed to stay out in front and pull my bike,” Ellen exclaimed. Wire Dog just looked puzzled. So, Ellen led him back out in front of her bike until the rope was straight again, and told him to, “stay.” Ellen then walked back toward her bike, watching over her shoulder to make sure the dog stayed in place. Wire Dog sat still looking at her and waiting. He wanted to do the right thing but didn’t understand exactly what Ellen wanted him to do.

When Ellen had lifted up her bike, and was ready, she shouted, “Go.” Wire Dog got up and trotted toward her bike.

“No. No. Not this way,” shouted Ellen in exasperation, as she set her bike down again and met the dog halfway.

Again, she positioned her dog at the end of the outstretched rope. She pointed him in the right direction and started back toward her bike. She was not quite ready when suddenly Wire Dog saw something like a squirrel running away on the path ahead of them. He jumped up and started to run but was jerked back when he hit the end of the rope. Ellen saw what was happening, got on the bike, and started to peddle. Off they went together. Wire Dog now pulling hard on the rope and Ellen steering the bike and peddling just enough to encourage Wire Dog to keep going.

They had only gone a short distance when the little animal Wire Dog was chasing suddenly darted off the path and ran through the grass to get away. Wire Dog left the path too and dashed after the squirrel. Ellen tried to steer her bike to keep it on the path but that only made matters worse. With Wire Dog pulling one way and Ellen turning the other, the bike tipped over and Ellen went flying to the ground, badly scrapping her knees and hands.

That alone would have been bad enough, but Wire Dog kept chasing the squirrel, which pulled Ellen’s bike right over her legs, tearing her clothing and scratching her skin. 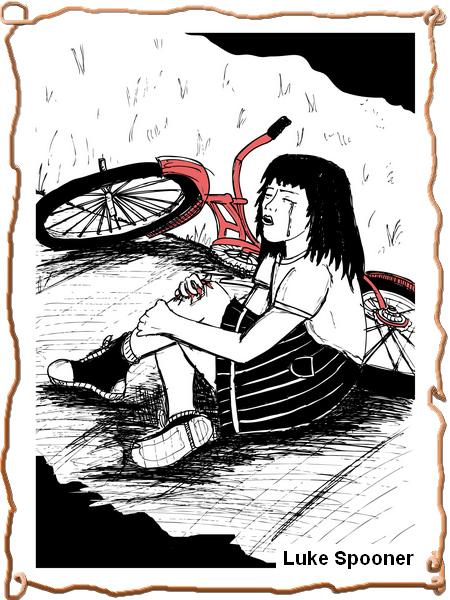 A man and woman walking along the path came running to help. They made Wire Dog stop chasing the squirrel, and lifted Ellen back on her feet. As they helped Ellen untie the rope from the bike and the dog, the woman told Ellen that doing something like that was not a very good idea.

“You’re lucky that you and your dog were not seriously hurt. It could have been much worse, you know.” Though the man agreed, he could see that Ellen was hurt, sorry, and terribly embarrassed. He could see that she knew she had done a rather foolish thing. So the man took some pressure off the poor girl by saying, “I’m glad you’re not hurt too badly. I tried something like this when I was about your age, and almost the same thing happened to me.”

The scraps on Ellen’s hands and legs were not bleeding badly now. So she thanked the man and woman for helping her, said she was alright, and told them she would go home and tell her parents what had happened.

On the way home Ellen thought about what she had done. She thought of how she would tell her parents. She decided that she should just tell them the truth. She was glad that she had good parents that might be disappointed in her actions, but would still love her and help her get over it. She made up her mind though that in the future she would think more carefully and not do such foolish things. Wire Dog trotted along beside her and smiled.