Wire Dog is not allowed to go to school, but one day he learned a valuable lesson. When Ellen is at school Wire Dog has little to do, so one day, he decided to go for a walk by himself. The first thing he saw on his little walk was a butterfly on a blade of grass, gently waving its wings open and closed. 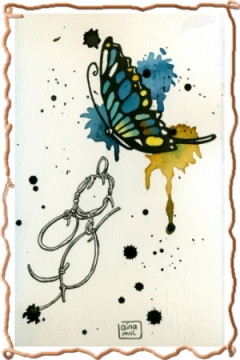 Wire Dog barked at the little butterfly and it quickly flew away. This made Wire Dog feel strong, brave, and even a little proud of himself. But there is nothing strong or brave about frightening things that are small and gentle.

Then Wire Dog walked on a little farther and saw a bird perched on the branch of a tree. Again Wire Dog barked and the terrified bird quickly flew away. Wire Dog felt proud again that he was so bold and fearsome. But frightening something small and harmless is nothing to be proud of. 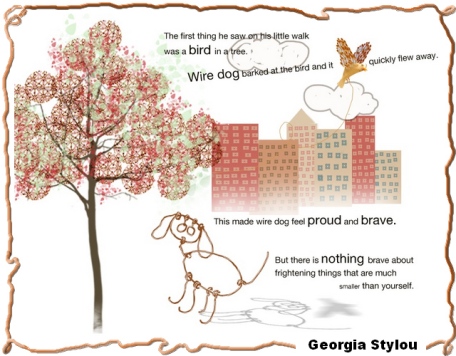 Next, Wire Dog came to a pond, were two ducks were gracefully swimming in the cool water. Wire Dog was so excited that he ran toward the pond as fast as he could. When he reached the edge of the water he jumped as far as possible and landed with a big splash. The two ducks immediately flew up into the air to get away from the sudden, rude intruder. 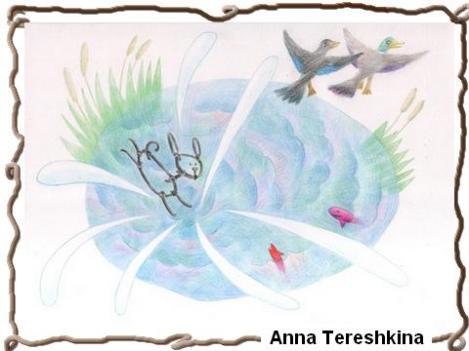 Wire Dog was not trying to scare them off. He was just trying to have a little fun. But what he didn’t know is that what might seem like fun to you can be really annoying to others. When he climbed out of the water he shook himself off just as a couple of nicely dressed people were walking by. How do you think they liked that?

If Ellen had been with Wire Dog when he did all these things, she could have corrected his behavior along the way. But now he was about to learn a lesson without her.

As he was trotting across the park, Wire Dog smelled something delicious even before he could see it. There, under one of the picnic tables was a tin can with a little bit of food left inside. The can should have been rinsed and recycled by the people who used it, but for some reason it had been left behind on the ground. Wire Dog sniffed it out and discovered some sauce on the sides and bottom of the can. It smelled so good that Wire Dog could not resist sticking his tongue into the can to lick it up. His tongue was long enough to get most of the delicious sauce, but there was still a little at the very bottom of the can that he could not quite reach, so he pushed his nose a little farther into the can to try to get it all. This helped, but there was still a little more so he pushed his nose in even harder. Finally he was pretty sure he got it all, so he tried to pull his nose back out of the can. But to the dog’s surprise, his nose was stuck in the can or in other words the can was stuck tight on his nose. 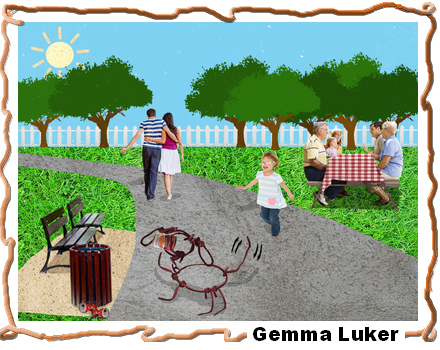 Wire Dog started to panic. He first tried to back up out of the can but the can came with him no matter how far or how fast he backed up. He tried to bark, but he couldn’t make much of a sound with his mouth and nose stuck inside the can. He tried to pry the can from his nose with his paws but he couldn’t wiggle it off. Wire Dog tried everything he could think of to get the can off his nose but nothing seemed to work. Finally he decided that all he could do was to run home and wait for Ellen to come home from school to help him out. So, with the can stuck tightly to his nose, Wire Dog started to run home.

First he ran past the nicely dressed couple that he shook water on. When they saw the can on his nose they felt sorry for him and would have helped but Wire Dog ran right past them. The man said, “Maybe that will teach him a lesson for being so thoughtless, and to keep his nose out of other people’s business.”

Soon he ran past the pond where the ducks had returned to their gentle swimming. When they saw a can on the dog’s nose they said, “Maybe that will teach him a lesson for being so obnoxious.”

Then he ran past the butterfly and the bird, which also saw the can and said, “Maybe that will teach him to not be so mean to others.”

Wire Dog learned a lot of lessons that day and he had a lot of time to think about them, because when he got home he had to wait for a long time before Ellen came home from school to help. By that time his nose had swollen so much that, Ellen needed her mom and dad to help pull the can from his nose because it was on so tight. 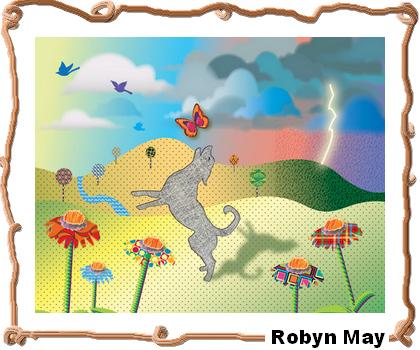 The next day when Wire Dog went for a walk, he kept very quiet whenever he saw a bird or butterfly. When he saw ducks swimming gently in a pond, he just stopped by the edge of the pond and watched for a while with his tail harmlessly waving in the air. And whenever he walked by people, he would first smile and then lower his head just a little as he passed. Sometimes he would get a little pat on the head or a stroke on his back and the people would say, “What a nice dog.”